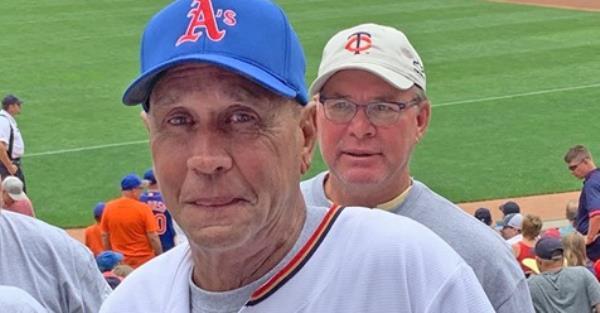 Kim Glieden had a reoccurrence of cancer this spring and this time the news was harrowing. “I was told that I have six months to live,’’ Glieden said Wednesday, after throwing out the ceremonial first pitch before the Twins-Mets game at Target Field.

Glieden was surrounded by 150 family and friends in a section down the left-field line. All wore gray T-shirts with the hometown nickname, “Kimmer,’’ on the back and “KG Strong’’ in the front.

Glieden was the third baseman for the last three of those teams. There are objective, long-time observers of this state’s amateur baseball scene that will tell you those Arlington clubs – top to bottom – were Minnesota’s most-potent in Class B or C in the past half-century.

“We would draft outstanding players from teams that were eliminated in our area, but they didn’t get much action,’’ Dan O’Brien said. “We were so stacked, we didn’t need much help.

Glieden and his brother Craig were in the A’s lineup with O'Brien, Greg Odegaard, Joe Driscoll, Greg Kubal, Bugsy Thomas … on and on it went.

“They had three of the best pitchers in the state: Odegaard, Joe Driscoll and Dan Hoefs on those back-to-back champs,’’ said Joe Kreger, the baseball man from Green Isle.

Before that, the A’s also had Dave Hartmann, another exceptional player.

The A’s have had largely festive conversations and reunions over three-plus decades. That hasn’t been the case since the news of Kimmer’s diagnosis became public, and there has been added gloom this month.

My pal Driscoll, the 1979 state tournament MVP for the A’s, and a character for the ages, suffered a stroke on his right side and is in for a long period of rehabilitation.

“The doctors told Joe that he has to change his ways,’’ O’Brien said.

We can only hope that’s a limited change, because Joe still was an all-timer when I saw him earlier this year at a Gustavus baseball game in St. Peter.

Glieden’s situation received emotional attention earlier this summer. KMSP-TV (Ch. 9) had a reporter in Arlington and Kimmer, surrounded by his family and others, made a last run around the bases for the TV cameras. Tears accompanied the journey that he led that evening.

Hartmann, his old teammate and long-time member of the amateur baseball board, contacted the Twins about adding another honor for Glieden: throwing out a first pitch.

That happened on Wednesday

“I’ve been a hardcore Twins fans my whole life,’’ Glieden, 61, said. “Tony Oliva and Rod Carew were my heroes. Watching them at Met Stadium as a young fan was great.’’

And throwing out the first pitch at the new outdoor ballpark?

“This is hard to believe,’’ he said. “I could have made a better throw to the plate, but all these people from Arlington, with my whole family here, this is tremendous.’’

What if this Twins’ team keeps it together and makes a run to the World Series?’’ I’m going to be around for that,’’ Glieden said. “Definitely.’’