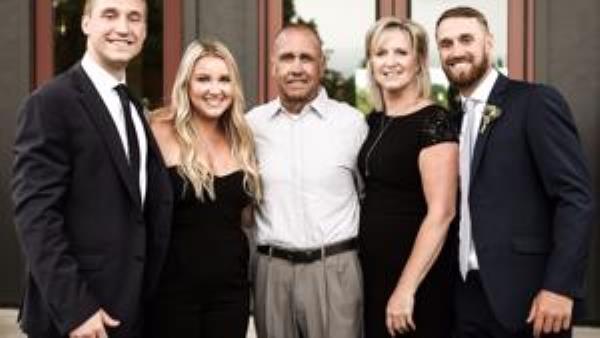 Kim Glieden fights for another 17 years, with support from his family and his baseball family
Posted on Jul 25, 2019

Kim Glieden lay in bed one night, just 24 hours or so away from a reunion of baseball players from Arlington, Minnesota. He had this thought of rounding first base, hitting second and third, stepping on home plate.

And that's what he did June 5 at Arlington Ball Park, his former baseball home with the A's.

Current players along the third-base line with high-fives. Former Arlington teammates, friends, joining him in his trip from the batter's box all the way back around to home plate.

This moment coming just eight days after doctors told Glieden, of Chaska, he likely had six months to live.

FOX 9 News, in Arlington as part of its Town Ball Tour, captured the moment on video. Glieden extending his arms out first, then upward, as he crossed home plate.

Then like any good team, a team of brothers, they came together to celebrate.

"My high school baseball coach, Larry Klunder, was there, and running the bases with us. I said to myself, I got to do this right, for him. So I'm taking the wide turn at second, taking the inside corner, and everyone started saying 'Yeah!' I have a compression fracture in my back, and I didn't even know if I could do it," Glieden said.

Glieden grew up in the heart of town in Arlington, some 60 miles southwest of Minneapolis on Highway 5 in Sibley County.

Kicked out of bed one morning to work with his dad, he spent the next 42 years working for Adolfson & Peterson Construction.

Baseball, though, was his passion. A starter for Arlington-Green Isle High School as an eighth-grader, Glieden joined the A's amateur team one year later. He played for 30 years, winning three state championships in 1979, and back-to-back in 1984 and 1985.

"We were pretty much a lock to be in the state tournament at that time. We just had excellent, excellent baseball players," Glieden said.

"I was a hothead as a player, a bit cocky. I always said, 'If you're good, you can be cocky.' And we were. We were really good," he added.

Glieden went on to play football and baseball at Golden Valley Lutheran College, the school closing in 1985. He added a third sport, basketball, at the behest of the team's head coach.

With two players removed from the basketball team due to grades, Glieden, who had been playing intramurals to keep in shape for baseball, was called up.

"The basketball coach was Flip Saunders (former Minnesota Timberwolves head coach and general manager). He came up and asked me and another kid if we'd take these spots on the basketball team so they'd have enough guys to practice. So we did. I got in a few games," Glieden said.

Glieden said he remained in touch with Saunders for years, meeting his wife and son, Ryan, the current Timberwolves head coach. They even attended a Commodores concert together.

Glieden finished college in Mankato, focusing on football. Ironically, Cory, the oldest of his three children, played baseball for the Minnesota State Mavericks between 2010 and 2013.

Staying in the game, Glieden umpired for nearly 20 years, working everything from high school and amateur state tournaments to the Minnesota Gophers non-conference schedule, other collegiate ball, and the St. Paul Saints.

"There were many days, there were many nights at the ball park. I would even go down to the park, help the younger kids. Be a mentor, be a coach. That was what I could do. Open the strike zone up, make the kids swing the bat. And everyone had a good time. I enjoyed it," Glieden said.

Glieden, 61, a father with wife, Sandy, of three Chaska High School graduates — Cory, Carly and Garett — sits on the couch, baseball is on the TV, a half-complete 1,000-piece puzzle is on the table.

Through seven rounds of chemotherapy, three surgeries to remove parts of both lungs, the cancer keeps coming back.

After spending the weekend at the family's cabin near Osakis, fishing among his most favorite hobbies, Glieden doesn't think about bucket lists, things he wants to do, he's done them. And God willing, he believes, he's going to continue to do them.

For at least 17 more years.

"These people tell me I have six months left to live. Well, it's not up to them. It's up to the guy in the sky up here. I know people that have lived five, seven, eight years, so this number 17, there's something up with it. I'm shooting for another 17 years," Glieden said.

The No. 17 popped up again recently. Asked to throw out the first pitch at a Minnesota Twins game — first during Joe Mauer weekend in June, the timing just not able to work — the team came back with a second option.

"The Minnesota Twins came back to us with July 17, we just knew it was meant to be," Sandy Glieden said.

They expect roughly 150 family and friends in attendance for the pitch. Jerseys are printed up, the No. 17 on the back. A chartered bus will take the crew to the game and then out to Kim's sister's place in Minnetonka for a party.

"There's still people calling I guess. Wanting tickets. And there's people with season tickets, unable to attend the game, that are calling, offering to give us their seats behind home plate if we want. It just keeps going. It's incredible," Kim Glieden said.

Kim planned to pick up Cory from the airport Monday, two days before the Twins game, a plan in place to prepare for the pitch.

"We're going to play a little catch," Glieden said. The grass in the family's home yard glistening green. "I can't even remember the last time I threw a baseball."

How every town tried to outdo the next with their field.

"We probably hated each other on the field back then, but I'm not sure if it's because of (my cancer), I feel like it was even before this, now we're all just such good buddies. Guys from all over the state have gotten in touch and we just talk," Kim Glieden said.

"It's been like an extended family," Sandy Glieden added.

And now that family stands with Kim as he fights for 17 more years. He fights for more trips around the bases, more catches in the backyard, more of the game he's loved his entire life.

He's playing fantasy baseball this year — his team holding their own, good enough to make the playoffs. The fantasy football draft is right around the corner. Kim is the defending champion, in his first season. He had all of the Kansas City Chiefs.

"I'm living the normal life like anybody else is. I feel really good. If I didn't have this broken back, and neuropathy — it's hard to feel my feet and fingertips at times — I just keep living, keep busy. I'm not going anywhere. I get up every morning, send Cory, Carly, Garett, and Sandy text messages when I wake up. Tell them I love them. Every morning," Kim said.

Every morning. For at least 17 more years.