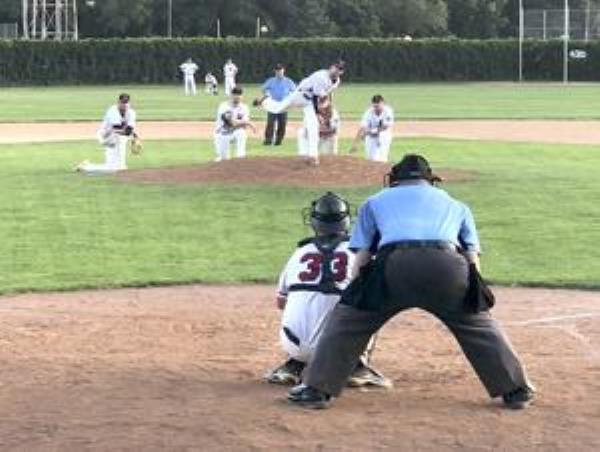 After stomping St. Clair on Saturday, August 3, Belle Plaine had a chance to clinch a state tournament berth on Sunday at Waterville. Instead, it was the Indians doing the celebrating, taming the Tigers 4-0 en route to their 30th consecutive win this season. (That’s not a misprint: Waterville’s record is a gaudy 30-1.)

With Jordan claiming the other state bid from Region 6C, Belle Plaine is vying to secure the region’s final berth – along with five other teams: Blue Earth, Eagle Lake, Henderson, Morristown, and St. Clair.

The 13-60 League’s Morristown Morries will face Henderson at Le Sueur on Friday, August 9, with Belle Plaine awaiting the winner at 11 a.m. Saturday in Jordan. If the Tigers win, they will play again at 4 p.m. – and again in Jordan – for a state tournament berth. Should the Tigers not win twice at Jordan on Saturday, their sparkly 19-9 season will be over.

Let’s make a day of it Saturday at the Mini Met and punch that final state ticket! If you can’t join the fray, follow along at twitter.com/bptigertown.

The St. Clair Wood Ducks are in their first season as an MBA franchise, having done quite well for themselves with the 13-60’s No. 3 seed. Belle Plaine, meanwhile, the RVL’s No. 2 seed, played its first season of hard ball in 1885. Not to get snooty, but the advantage, goes to Tigertown.

With two games on tap for the weekend, Wes Sarsland got the ball first from Manager Matt Ruehling.

Sarsland gave up a pair of runs over 6.1 innings but looked sharp once he settled in, striking out five batters across the fourth and fifth innings. The left-hander sat down six in all. Clayton Meyer came on in relief and went the rest of the way, proving flawless but for a walk.

El Tigretown took a 7-2 lead into the eighth inning before catching fire with their bats, stringing together five straight hits and seven in the inning, with the final knock from Tyler O’Brien, resulting in a 10-run rule victory.

Hitting heroes were many on the night, in what proved to be BP’s last home game of the season. O’Brien went 4-for-4 with a steal and three RBI; Josh Terrio went 3-for-3 with a pair of hit-by-pitches, reaching base all five times; Jared Miller drove in three runs behind a pair of safeties; Jake Mercado went 2-for-3 with three runs. Derek Dahlke and Pat Schultz also had multi-hit efforts in the 18-hit attack.

Brody Curtiss started on the hill for Belle Plaine, opposed by big lefty Dalton Grose. The Tigers knew what they had in Curtiss and got a solid performance from the right-hander. They didn’t know much about Grose but soon found out plenty, including never to overlook a guy whose last name is on the home-field scoreboard (William J. Grose Field).

Waterville’s second hit of the ball game opened the fifth inning, and a bunt attempt proved pivotal as Curtiss fielded the ball and went for the lead runner at second base but threw high, with both runners safe. After another bunt, sacrificing the runners to second and third base, Sam Stier delivered the game’s first big blow, a single, for a 2-0 lead.

The Indians struck for another run in the sixth inning, taking a 3-0 lead. Meanwhile, our boys were still seeking their first hit of the afternoon. Derek “Dale” Dahlke changed that with a single to start the seventh, but he was quickly erased on a 4-6-3 double play.

With two outs in the ninth and Grose still doing his thing, Curtiss spared the Tigers the ignominy of a one-hitter by stroking a single. Not that a two-hitter feels much better, but when you can’t get a darn thing going for the entirety of a ball game, you tip your cap and you move on.

Jake Mercado and Nathan Herman split the rest of the pitching duties, with the former yielding the final two runs.