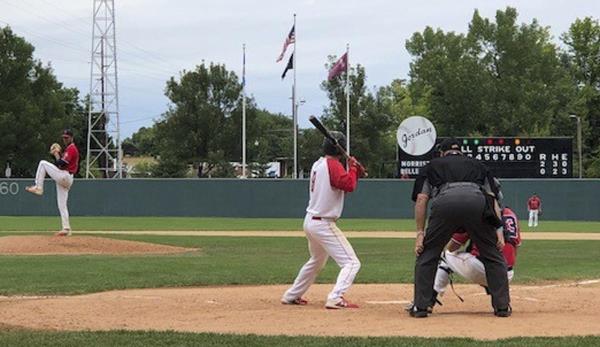 If it’s any solace, Morristown completed its improbable run through the losers’ bracket, winning five straight games after a 4-3, opening-round loss to St. Peter to claim the third and final state tournament berth from Region 6C. Jordan claimed the region’s top seed with a 4-3 victory over Waterville in the championship game, snapping the Indians’ incredible 30-game winning streak.

Derek Dahlke was the only Tiger drafted, picked by the Indians along with St. Peter’s Andy Regner and Jesse Anderson. Waterville’s first game will be Sunday at 1:30 p.m. against St. Benedict, in Delano. The other state tournament sites are Maple Lake and Dassel.

While the ending leaves a sour taste, Matt Ruehling’s first season as field manager was truly a fine one, as the Tigers ended 19-9 overall with a 10-4 mark in RVL play. Final stats should be available shortly via the Stats tab at bptigertown.com.

On the mound, Nathan Herman led the team with six wins, Brody Curtiss posted a 1.57 ERA and Wes Sarsland topped the team with 39 strikeouts. At the plate, Tyler O’Brien (.359) and Curtiss (.355) were neck-and-neck for the team’s batting title heading into Saturday’s game while O’Brien owned the top on-base percentage (.447). Curtiss was the Tigers’ top slugger, at .566, with a team-leading three home runs.

Although Belle Plaine became Waterville’s 30th consecutive victim in its previous game, the Tigers felt good about their chances of winning a pair of games Saturday at Jordan to claim the region’s third and final state tourney berth. Ruehling handed the ball to Herman and understandably so, as the right-hander remained unscathed with a 6-0 season record.

As the old war expression goes, the battle plan sounds great until the bullets start flying. The first and third batters of the game for the Morries reached via error, with the first run coming across on a two-out, daring bases-loaded steal of home by Bryan Lamont.

Another defensive miscue by the Tigers in the third inning led to a second Morristown run, putting the pressure on our troops from the early going. Luckily for the Tigers, Herman took matters into his own hands and retired the next 11 batters in a row.

Team Tigertown’s first – and only – run of the game came in the fifth inning when Matt Schultz opened the inning with a walk. Schultz’s appearance in the game was kind of like a wrestler you think is long retired, but the next thing you know, there he is in the ring at Wrestlemania and the crowd loves it. Joe Hankins ran for Schultz and soon scored on an RBI double from O’Brien.

Herman gave up a leadoff double in the 7th, 8th and 9th innings, but he wriggled out of trouble each time – in the ninth, thanks to some help from reliever Derek Dahlke. The Tigers, who left 11 men on base in the game, stranded runners in scoring position in the 6th, 7th and 8th frames.

As the game was headed for the bottom of the 9th and Belle Plaine’s last cracks, the skies opened up and a two-plus hour rain delay ensued. Although the final inning was recorded as 1-2-3 in the scorebook, it was anything but uneventful.

O’Brien led off the inning and was hit by a pitch, but the umpire ruled he leaned into it and called him back to the batter’s box. He struck out. Carsen Ladd then dropped what looked like a sure hit into right field, but a diving catch wiped that off the board, too. Curtiss hit a foul pop that looked like the game’s final out, but it was dropped by the Morristown first baseman. A groundout followed, with the bubble of Belle Plaine’s prolonged hopes finally popping.