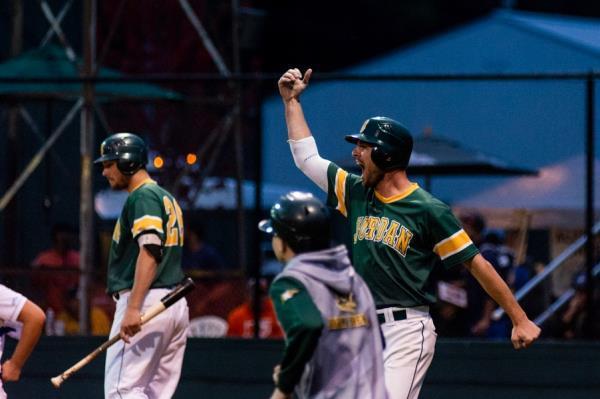 And then there were two.

Jordan outlasted Buckman in a 4-3 Class C state tournament semifinal win Sunday at Irish Stadium in Maple Lake. The Brewers earned a matchup with Hutchinson as they stymied the Billygoats in the penultimate game of the Class C tourney.

After a rough first inning, Upsala draftee Matt Swanson cruised on the mound until Jordan loaded the bases with one out in the top of the seventh. The Brewers got an RBI single from Steve Beckman and another run on a grounder bobbled for an error to go up 4-2.

Buckman threatened and got within one in the eighth thanks to three errors on Jordan shortstop Nate Beckman. The Billygoats put two on with fielding errors, and then a throwing error on a double-play chance allowed a run to score and make it 4-3.

Joe Lucas came on in relief for the final 5 ⅔ innings and finished the win with a 1-2-3 bottom of the ninth for Jordan.

Jordan starter Glenn Parker, a draftee from Henderson, ran into trouble in the fourth inning, with an error and two hit batters to load the bases. Lucas came in from center field to pitch, allowing a sacrifice fly to Travis Kahl that tied the game 2-2.

Scott Hollingsworth had a two-out RBI double, and a ground ball by Nate Beckman scored another as Jordan went up 2-0 in the top of the first inning.

Buckman responded with three straight singles, including an RBI from Lane Girtz that cut it to 2-1 after one inning.

Swanson only faced trouble in the two innings he allowed runs, and of the four, just two were earned. He gave up seven hits in his nine innings of work with two walks and four strikeouts.

The Billygoats had topped three region champions during their state tournament run, in New Ulm, Young America and Farming, but fell to the Region 6 winners in Jordan.

The Jordan Brewers nipped away early and never trailed in a 4-2 Class C State Tournament quarterfinal win Sunday over the Bemidji Blue Ox at Irish Stadium in Maple Lake.

Jordan scored runs in the second and third inning before Bemidji tied the game with two in the top of the fourth. The Brewers responded with a run in the bottom of the inning to go up 3-1 and added an insurance run in the eighth.

Scott Hollingsworth started on the mound for Jordan and went seven innings, allowing two runs, one earned, on five hits and two walks with two strikeouts. Joe Lucas pitched two innings for the save, allowing just one hit and striking out four.

Hollingsworth went 2-for-4 with an RBI for Jordan at the plate, while Alex Buckman and Adam Kalal each added RBI.

Bemidji’s Cody Rutledge was 2-for-4 with a solo home run and Brazil Zuehlke had a pair of hits.

Jordan advanced to play Buckman in the semifinals at 7 p.m. in Maple Lake.