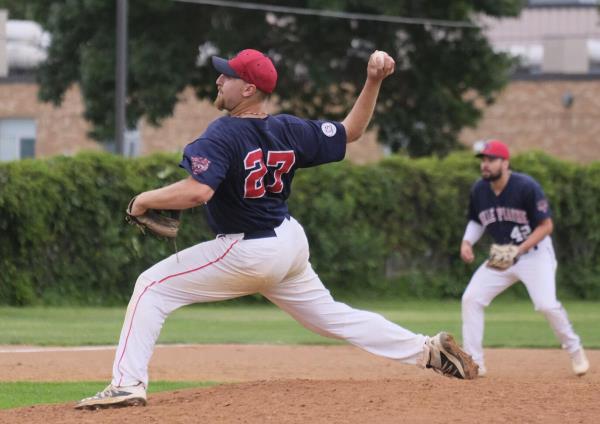 Belle Plaine buried one ghost last weekend but got a double portion of another.

The Tigers kept Morristown at arm’s length on Saturday, Aug. 8, by a score of 6-3, making up for last year’s season-ending loss in these same Region 6C playoffs.  In a state qualifying contest Sunday, Aug. 9, at Jordan, the Tiger Train scored three runs in the first inning and took a 5-3 lead to the bottom of the sixth. Things collapsed from there, resulting in a 10-run loss that continues Jordan’s long-running choke hold on the locals.

Jordan clinched a state tourney berth with the comeback victory, meaning last year’s Class C champs will return to defend their title. They will be joined by Gaylord and its electric minor-league lefty, Brody Rodning, thanks to a 4-1 win over St. Peter.

That means the RVL’s Tigers and Saints and 13-60 League representatives Morristown, St. Clair, Eagle Lake, and Waterville will all vie for the third and final state tournament berth from Region 6C.

Belle Plaine will play at 1:30 p.m. Saturday, Aug. 15, in Blue Earth against the winner of Eagle Lake and Waterville. If the Tigers win, they will play again at 4 p.m. in Blue Earth against the last team standing from the other side of the loser’s bracket. Two wins means a trip to the state tournament in Springfield and Milroy; anything less means the end of the crazy Covid campaign.

Your roving reporter will be on the scene to tweet updates for whoever might not make the trip to Blue Earth. Go to Twitter.com/bptigertown, or, visit bptigertown.com and keep an eye on the Twitter widget at the top right side of the home page. Viva Los Tigros!

The Tigers had a bitter taste in their mouths all offseason after last year’s 2-1, season-ending loss to the Morries. They responded by getting after it right away with a run in the first, yet left the bases loaded.

The heart of the Tiger order went back to work in the third inning, scoring three runs. Jake Mercado’s RBI single was followed by a two-run single from Pat Schultz, who drove in the Tigers’ first run on a bases-loaded walk.

Belle Plaine took a 5-0 lead to the 8th when the Morries awoke, scoring three runs off Tiger hurler Brody Curtiss. The Tiger right-hander ended the inning – and his day on the hill – with his 11th strikeout of the evening.

Curtiss also delivered an RBI double in the home half of the 8th, providing the final margin of victory. Curtiss not only led the way on the mound but with the bat as well, going 3-for-4 with two doubles, two runs, an RBI and a walk. Josh Terrio aided the attack with two hits.

Jared Miller worked a 1-2-3 9th, picking up a pair of punchouts and the save.

Belle Plaine’s long and current losing streak to Jordan has been mentioned in this space a few times in recent years. Going forward, it shall simply be referred to as “The Streak.” Consider it a statistical speakeasy: if you ask the right person, you can still find out where it’s at.

Playing at the home of the defending state champions, the Tigers used five hits in the top of the first inning to score three runs. Aiden Ladd, Jake Mercado and Jack Kruger all delivered run-scoring hits – with Ladd’s a two-bagger. The Brewers responded with a pair of runs in the bottom of the first off Tiger starter Derek Dahlke.

Jordan tied the score in the second inning thanks to an error and the score stayed put until the fourth, when Ladd lifted his team-leading third circuit clout of the season. Two innings later, Dahlke belted a solo shot of his own and the Tiger faithful started getting that funny feeling in their bellies.

Almost before a person could tell a friend that the Tigers might have something brewing in Jordan did the floodgates open – not the skies, which increasingly threatened as the evening wore on – but the Brewer bats. Eight runs crossed home before the bottom of the sixth was complete.

The Tigers didn’t give up, scoring twice in the 7th and 8th innings. Ladd even represented the go-ahead run with two outs and the bases loaded in the top of the eighth, but he was retired on a pop-up.

A nightmarish bottom of the eighth followed, with Jordan scoring seven more runs – each more painful than the last – to put the Tigers out of their seemingly-sudden misery an inning early via the 10-run rule.

Dahlke worked a season-high 5.1 innings on the mound, absorbing seven runs (five earned) and the loss. He was followed by Miller, Colton Kerkow, Kruger, and Terrio.

Dahlke paced the Tigers’ 12-hit attack with three, while fellow long-baller Ladd – who drove in three runs – and Tyler O’Brien collected multiple knocks. Curtiss drove in two runs and had a hit, as every spot in the Tiger order but one made a dent in the hit column.